In the computer gaming world, the next instalment of a game is always eagerly anticipated.

The project for Sublime

Sublime Promotions, a division of Lime Communications, is a leading brand partnerships and promotions agency, orchestrated the big reveal for the latest version of one of the most popular fantasy under-world battlefield video games.

Matthew Loader, Account Director at Sublime said, “We found the perfect venue, a Victorian sewage works in South East London, to introduce the new characters in the game; a race of vicious mutant rat-men who live in the depths of the under-world.”

The space was ‘dressed’ to transport, into the dirty depths, the 100 journalists who were invited from across Europe, to the preview.

“We wanted to replicate the underground vibe”, said Matthew. It started with a bit of theatre, a few rat creatures snatching helpless journalists. A whiff of sewage, banners and large-scale props set the scene in the real world, ahead of a presentation by the developers of the game. Next a couple of hours at the many consoles, where the journalists could sample the game in the fantasy world.

When planning large props for an event, Matthew likes to work with the team at Dick George Creatives. The challenge on this occasion was to create a replica of the revolving war engine, which is a major feature on the battlefield.

“I can give Dick a poor sketch of what we need along with the style guides from the game. His immense attention to detail and knowledge of materials means that I can rely on him to bring the fantasy world to life.” Matthew Loader

The war engine, which is 3 metres wide and 4 metres high, needed to be built in sections, so that it could be transported and assembled at various locations for several other PR events in the UK as well as in Germany.

As the complete unit was outside of the scope of even the largest conventional truck, the biggest challenge was with manufacturing it in de-mountable pieces, so that it could be efficiently loaded and transported, whilst still maintaining its structural integrity.

“The fact that a person had to be able to sit inside it, as a photo opportunity, was also an interesting problem to solve.” Dick George

On the launch day the team at Dick George Creatives arrived to assemble the large prop at the venue.

“The fantasy battlefield replica needed to be precise and it looked even better than I could have imagined.” Matthew Loader 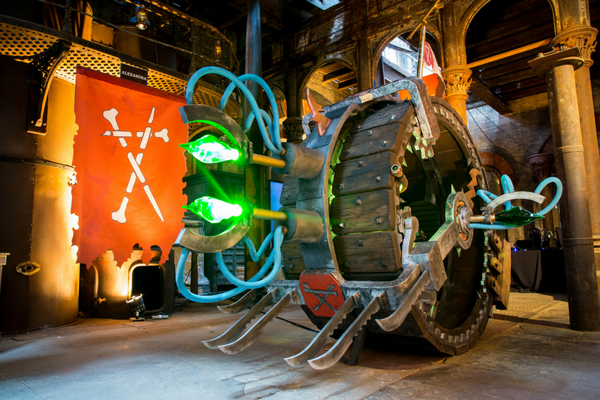 “In the crazy, break-neck world of events and prop-making everybody is run ragged, something we’ve become accustomed to. As far as the team at Dick George Creatives is concerned, it’s always a great pleasure to work with Matthew and Sublime.” Dick George